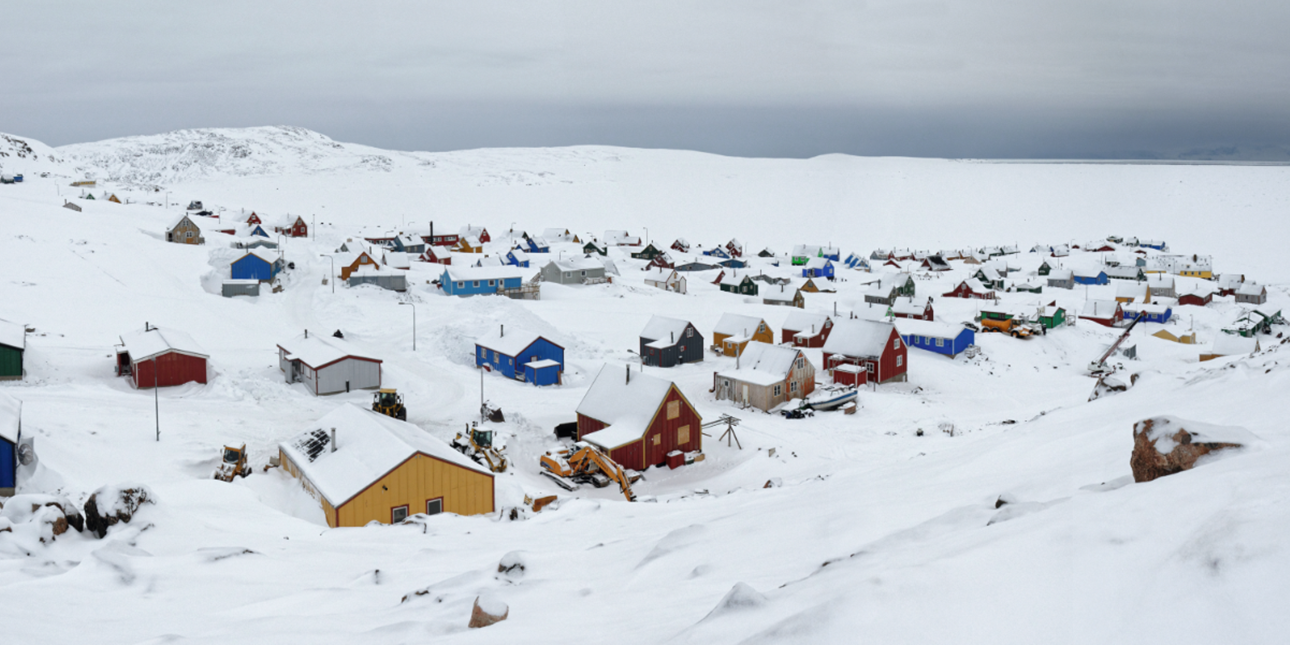 Since 30 years, I travel to the High Arctic. One of the many amazing experiences was, when we visited the remotest village on earth. The photos and texts in this Blog can be found in my Book “Frozen Latitudes”, where I collected the best photos and stories of my life.

It was a real winter back then, with deep snow and bitterly cold temperatures, when we prepared for a long range dog sledge trip with local Inuits. On our way, we first arrived in the small Inuit community „Ittoqqortoormiit“. Its name means “The place with big houses”, which is located in northeast Greenland – stunning 800 km away from the next village.

Photo: from my book “Frozen Latitudes” – a photographic tribute to the beauty of the High Arctic.

Just before sunrise, I went outside into the cold to explore the village. After a little walk and some deep inhalations of the dry and cold arctic air, I suddenly found myself standing right at the cemetery of the village. I looked at all the crosses, which were buried in deep snow. Some of them were nearly gone under the snow. The Inuit express their respect for life with colored plastic flowers and homemade presents for their loved ones. Seeing that, I asked myself: “Can something so big like life just fade away, become nothing, just as the crosses which stand in rows and gradually disappear into the snow the further back they are until they are all gone?”

After that I continued my exploration of the village. I was stunned that this remote village provided a full infrastructure to their inhabitants. After every snowfall, some of the snow-buried paths between important spots reappeared. Like the heliport up on a hill above the village. The hospital (which is only opened when there is illness). The police station. Small kiosks and the supermarket with an attached post office where people can buy a wide range of things: guns and ammunition, household goods and tools as well as imported food. The church. A nursery. A school for all pupils up to the age of 14 years and a sports and community hall.

Only the main paths of the village around the church and the „market place“ in front of the supermarket are dug out by a Caterpillar, creating snow walls many meters high.

Photo: from my book “Frozen Latitudes” – a photographic tribute to the beauty of the High Arctic.

The sacristan of the villiage opened the church for us and lit the candles on the altar. We sat down and soaked up the atmosphere until the priest arrived. He was wearing a winter anorak and started to play the organ. There I was: sitting in a church, listening to organ music in the remotest village of the world. The High Arctic all around me, while remembering the cemetery experience in the remotest village of the world. At the same time, I felt warmly welcomed by the villagers.

Life can be such a deep experience, which I want to share with you in my book “Frozen Latitudes”.

My Photographic Tribute to the Beauty of the High Arctic